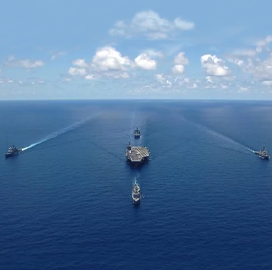 Unlike the other service branches, the U.S. Navy is significantly expanding its force structure through a mix of service life extensions and new construction, according to the Center for Strategic and International Studies. The long-term move was made in response to the high demands of day-to-day operations, long lead times and high capital costs for weapons systems.

The Navy's 2020 expansion plan is part of its bid to house 355 ships by 2034. In the meantime, the service wants to redirect some of its resources toward research and development of new key capabilities, according to its budget proposal for fiscal year 2021.

Tracy Howard serves as Leonardo DRS' senior vice president and general manager of naval electronics. He leverages over 30 years of experience in the defense industry and the Navy.

Before joining Leorado DRS in January 2020, Howard served as L3 Technologies' vice president and general manager for maritime power systems. His work was based in Anaheim, California, and Tulsa, Oklahoma.

According to Leonardo DRS' website, Howard had a distinguished career in the Submarine Service. He commanded multiple submarines and served as the director of resources and requirements for the Navy's undersea tactical sensors, systems and weapons.

Howard held progressively challenging and responsible roles in the Submarine Service for 15 years. He was stationed at Charleston, South Carolina; Pearl Harbor, Hawaii; and Norfolk, Virginia.

He holds a master's degree in operations analysis from the Naval Postgraduate School and a bachelor's degree in marine engineering from the U.S. Naval Academy.