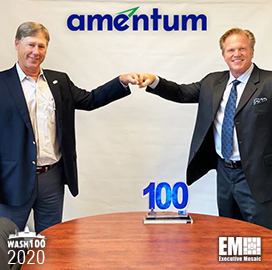 Amentum CEO John Vollmer, a Potomac Officers Club member, has received his fifth Wash100 award from Executive Mosaic, marking the fifth time he has won the award in the last six years.

Vollmer was key in the $2.4B sale of AECOM's management services business to Lindsay Goldberg and American Securities in October 2019.

“American Securities and Lindsay Goldberg have impressive track records of building lasting value for their portfolio companies, particularly in the government services sector. I am confident that this world-class investor group has the resources and expertise that will enable us to accelerate our innovation and future growth," he said.

Vollmer began leading the management services group in September 2016, overseeing technical management services work for federal agencies such as the departments of Defense, Energy and Homeland Security. He previously served as an executive vice president and chief operating officer for the group.

In April 2019, Vollmer led Amentum's win of a potential $12.6B contract to provide the Navy with aviation platform-level logistics support and related services.

The company's work will help the Navy maintain and modify multiple weapons and integrally related systems and expand AECOM's naval and aviation business.

Posted on November 4, 2020 by Robert Johnson