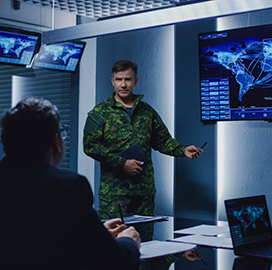 Camarillo, a past Potomac Officers Club speaker, noted that the Army’s network modernization efforts have undergone significant changes since he left the service in 2015, making the present an opportune time to carry out an assessment.

Connectivity between tactical and strategic hubs as well as between theaters has been an ongoing concern for the Army, which considers network modernization a top priority as it readies against China and Russia. Such efforts also support the Department of Defense’s Joint All-Domain Command and Control initiative. According to Maj. Gen. Jeth Rey, director of the Network Cross-Functional Team, Camarillo challenged the division to improve transport, bandwidth and the service’s data fabric in relation to JADC2.

The ongoing review is expected to end within 2022.