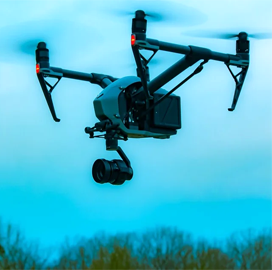 5 Leaders in the Unmanned Systems Industry

The Department of Defense recently finalized which counter-small unmanned aircraft system solutions it wants the joint force to use. The Army's Joint C-cUAS Office, which led the system selection, cut down the number of candidate systems from about 40 to a mere eight.

Unmanned systems for combat and intelligence, surveillance and reconnaissance missions are gaining importance in reducing the military's troop casualties and have prompted the armed forces to prioritize the procurement and development of unmanned systems over manned systems.

Meanwhile, the commercial sector is expected to grow the market for unmanned systems because of their applications in firefighting, agriculture, underwater sea exploration, disaster relief, recreation, photography and videography, according to a market study by Mordor Intelligence.

Fotheringham, who brings in over 25 years of experience, reports directly to Andy Green, the executive vice president of HII and president of Technical Solutions, the company said.

Before HI Technical Solutions, he served as president and chairman of the board of Hydroid, a newly acquired HII company that provides services for the marine research, defense and commercial markets.

During his tenure at Hydroid, Fotheringham’s main responsibility was to make sure that the products and technology of the Massachusetts-based company constantly evolved to stay competitive in the global maritime market.

Fortheringham made a significant contribution to the development of marine robotics technology. Upon joining Hydroid in 2008 as vice president of operations for five years, he led the company in the research, engineering and design of autonomous underwater vehicles known as remote environmental monitoring units, used for seafloor mapping and underwater surveying.

Previously, he assumed managerial positions for 11 years at Kongsberg Maritime, a Norwegian company specializing in maritime technology services. While supervising the organization’s underwater surveillance operations, he was involved with hydroacoustics, underwater positioning and fisheries acoustics management.

Fotheringham started his career with the U.S. Navy, assuming the role of a submarine officer on the USS Salt Lake City. He was also an engineering and plant operations instructor for a submarine nuclear power plant.

He received his bachelor’s degree in electrical engineering from Washington State University and his master’s degree in business administration from the City University of Seattle.