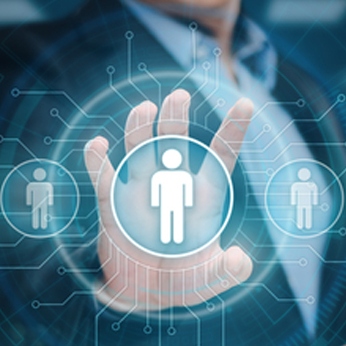 Emerging technologies and workplace innovations are sprouting in almost every industry. However, the human resources sector can only thrive when the delicate balance between humanity and technology is maintained, according to HR software maker Sympa.

Industry leader Jeanne Meister said HR practitioners must prepare to embrace a "blended workforce" of humans and robots. Gartner predicts that by 2021, 25 percent of workers will be using virtual employee assistants on a daily basis. Such technologies include the range of conversational robots used for all types of HR processes.

Tammy Heller, a member of the Potomac Officers Club, serves as the senior vice president and chief human resources officer of Perspecta, the Chantilly, Virginia-based IT service management company.

Since assuming the role in April 2018, she has been leading all segments of the HR strategy and implementation to the 15,000 workforce assisting the newly merged $4B public company consisting of three former companies Vencore Holding, KeyPoint Government Solutions and the U.S. public sector business of DXC Technology, according to her Linked profile.

Heller oversees executive and non-managerial talent acquisition, compensation and benefits as well as talent management and HR operations and business partnerships. She is also in charge of learning and development, employee engagement, and reporting and analytics.

Heller brings more than 18 years of senior management experience to Perspecta, establishing credibility with senior executives, board of directors, and regulators. She specializes in forming high-performance teams that deliver hiring, retention and engagement strategies.

Prior to Perspecta, she was the vice president for global human resources at CGI, an IT and business consulting services based in Quebec, Canada. She was responsible for directing the company’s global HR centers of excellence such as talent management, HR mergers and acquisitions integration as well as overseeing the advancement of human capital strategies and solutions.

Her executive career also includes roles as an HR vice president at Capital One, a financial services company based in Vancouver, Canada; as a vice president for credit division governance and oversight at Freddie Mac, a mortgage loan company headquartered in Virginia; and as a global HR director at BearingPoint, a management consulting company located in the Netherlands.

Heller earned her bachelor’s degree from the University of Virginia and a master’s degree in organizational leadership from Marymount University.

Donna Diederich has been serving as chief human resources officer since January 2019 at management consulting company LMI. In the said role, she is responsible for the entirety of LMI’s human resources organization, including talent acquisition and development, project management, program development, talent strategies and solutions and succession planning.

Diederich’s expertise is in HR leadership, as she directs several teams in the training and development of critical personnel. Managing talent acquisition programs to present solutions for the organization is another of her areas of focus, LMI said.

Diederich also commits her efforts to building training initiatives for future leaders and personal training. Among her undertakings is the University of Chicago Booth and HR Executive Program at Cornell.

Previously, she joined Abt Associates, a research company headquartered in Maryland, as CHRO for more than a year, focusing on developing an international talent strategy.

She also had a nine-year stint at aerospace manufacturer Northrop Grumman, where she oversaw over 6,000 employees.

Diederich attended Missouri State University, where she earned her bachelor’s degree in psychology and business.