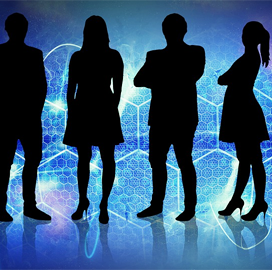 The Potomac Officers Club previously featured five account executives working with individual clients from the federal government and military contracting communities. The role was borne out of the need for companies to customize their services to fulfill the nuanced requirements of individual clients, according to Belo + Company.

For executives handling Department of Justice accounts, the focus is to support the government’s duty to enforce the law and administer justice. The department, for now, is focused on improving workplace safety in response to scientific and policy developments related to the coronavirus pandemic.

POC — a division of Executive Mosaic — presents five government contracting executives responsible for their company’s business with the DOJ.

Tasha Jones, a government contracting expert with an extensive background in military and national security matters, is the vice president of Steampunk’s Department of Justice sector business.

Jones joined Steampunk in November 2020 to establish and grow the justice sector business of the company, which is headquartered in McLean, Virginia.

At Steampunk, she is tasked with improving decision-making and troubled initiatives within the federal and defense markets.

She has more than 20 years of experience leading program management, intelligence, strategy, project coordination and business process improvement activities, having worked at organizations such as the DOJ, STEMBoard and Twenty39, according to her LinkedIn profile.

Twenty39 is a Springfield-headquartered company that she owns. The company allows organizations to monetize underutilized assets, reduce business operating costs and risk, as well as ensure customer satisfaction by applying the combination of logic, strategy and data on people, processes and technologies.

Earlier in her career, Jones worked as an IT project manager at the DOJ. Her work at the department resulted in the creation of two new units for the FBI, including a program management office tasked with maintaining an e-discovery program and IT systems.

The Steampunk VP has a bachelor’s degree in computer information systems from American InterContinental University. She also holds a master’s degree in global management from the New York Institute of Technology.

Fitzmaurice is deployed in Leesburg, Virginia, and primarily works with customers across the departments of Justice and Homeland Security, according to his LinkedIn profile.

With a career spanning over 15 years, he has gained experience in direct/enterprise sales, team leadership, business development and operations management.

Prior to joining Cloudera in August, he served as a senior sales manager at DLT Solutions, a provider of digital design solutions and enterprise-grade cloud offerings.

While at DLT Solutions, he managed the application lifecycle and information technology infrastructure divisions. He also co-created the DLT Secure Software Factory, established the DLT GovDevSecOpsHub and started the DLT ContinuousX podcast series.

He also spent a year as an enterprise account manager at Level Access, where he dealt with civilian and defense agency customers.

Fitzmaurice dedicated nearly five years of his career at Omnilert, a Leesburg, Virginia-based software company specializing in emergency communications. During his stint with the company, he was appointed as a business development director and an enterprise account executive for public sector and commercial customers.

Earlier in his career, he was a professor and consultant at Marymount University. He also held sales positions at RainedOut and American football teams Buffalo Bills and what is now known as the Washington Football Team.


Jason Hannah, Director of Justice and Law Enforcement at SAIC

Since assuming the role, Hannah has been responsible for growth strategy and business development efforts for the company’s Department of Justice business. He also deals with federal law enforcement clients, according to his LinkedIn profile.

He also spent nearly four years as a VP at MIL, a provider of cyber, engineering, financial and information technology services to the federal government. While at MIL, he led relationships, teaming, proposal execution and operations for corporate business development. His duties included establishing business development processes and advising staff on growth and performance strategies.

He also held leadership positions at E3 Federal Solutions. For nine months, he served as one of the company’s senior managers, focusing on federal law enforcement/intelligence community activities. He also served as director for homeland security and law enforcement and director for strategic growth.

Hannah holds a bachelor’s degree in liberal arts from Rocky Mountain College and a master’s degree in management from the University of Maryland Global Campus.