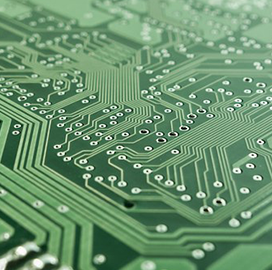 The global market for electronic components is poised for a 4.8 percent compound annual growth rate from 2020 to 2025, as per the Global Electronic Components Market 2020 Research Report.

Consumer electronics account for much of the anticipated growth in the electronics sector, driven by the rising demand for smartphones, artificial intelligence and voice recognition technology.

Over at the military side, the use of electronics has also seen exponential growth. As stated in a paper published in IEEE, electronics are embedded in practically every offensive and defensive weapon today. Present-day armed forces use electronics for a number of applications, including early warning systems, intelligence and command communications. In stark contrast, the military only used electron-tube devices for radio communications 25 years ago.

Prior to his current role, Slijepcevic was Honeywell Aerospace's president of mechanical systems and components. His business unit was responsible for defense and commercial aviation customers, offering air conditioning and environmental control systems, engine bleed systems, cabin pressure and life support systems, among other product lines.

Slijepcevic has been with Honeywell since December 2004 when he joined as vice president of sales, marketing and customer support.

As the head of his divisions, Mensh is responsible for establishing business strategies, supervising the execution of new programs and products and overseeing all aspects of site infrastructure.

Mensh was previously Textron's vice president of programs, with responsibilities ranging from personnel and investment management to proposal and research activities.

Before he joined the company, Mensh was a technical director at Aeronautical Radio Incorporated and concurrently served as program director. He was responsible for growing ARINC's aviation and modernization businesses.

He also served as director of business development for several ARINC business areas, in addition to leading various programs as a program manager and project engineer.

Mensh joined ARINC as an electronics engineer before he was promoted through roles of increasing responsibility.

A graduate of Loyola University, Mensh earned a bachelor's degree in physics and has also attended business management and development education programs.

He specializes in branding and identity, mergers and acquisitions, international sales, operations and general management.

Ekis said he prides himself in “delighting the customer” through effective product line strategies, new product development and customer service and support. He has considerable experience and success in international markets, including Europe and the Asia-Pacific countries.

Before he joined New Jersey-based Cobham in September 2007, Ekis was the director of sales at Lamina Lighting, a startup created to exploit LRCC multilayer ceramic on Cu/Mo/Cu substrate system for use in high-power semiconductor packaging.

Prior to Ferro, Ekis was a process engineer and customer quality liaison at Philips Electronics with a focus on multilayer ceramic capacitors and chip resistors.

Ekis began his professional career in April 1987 as a process engineer at Murata Electronics. He earned an education from Pennsylvania State University.

Posted on September 10, 2020 by Adrian Rosenberg