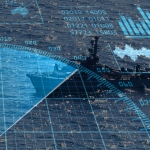 Providing mission-enabling solutions is a key part of an organization’s functions. Mission systems groups across the defense sector focus on a wide range of areas, including promoting global security and secure military communication, navigation and guidance and enabling training simulations.

To advance these focus areas, mission systems groups have established programs for the purpose of innovating solutions for the five domains: land, sea, air, space and cyber.

Solutions developed for the air domain include autonomous unmanned aerial vehicles, integrated avionics and helicopters that are billed to reinforce the military’s air fleet. Meanwhile, new naval systems, mine warfare unmanned surface vessels and next-generation platforms are being built to support missions at sea.

Mark Caylor serves as the corporate vice president and president of Northrop Grumman’s mission systems business unit. The company is a major provider of advanced solutions for defense and intelligence customers.

Caylor oversees the development and production of high-impact systems and hardware and software products in areas such as command, control, computing, communications, intelligence, surveillance and reconnaissance and cybersecurity.

Prior to his current roles, Caylor served as corporate VP and president of enterprise services and chief strategy officer. He led Northrop’s enterprise shared services organization, corporate strategy and mergers and acquisitions.

Caylor’s other roles at Northrop include corporate VP, treasurer, director of banking and capital markets, assistant treasurer and director of mergers and acquisition.

He joined the company in 2002 as director of pricing and cost estimating for Northrop’s aerospace systems business sector, where he also served as deputy VP of technology development.

Before he assumed his current role in November 2018, Jasper served as Rockwell Collins’ executive vice president and chief operating officer of government systems.

He is a member of United Way of East Central Iowa’s board of trustees, the Cedar Rapid city manager’s business advisory council and Iowa State University’s College of Engineering industrial advisory council.

Brady has been with GDMS for 19 years and has served in his role for nearly two. During his tenure as a general manager, he grew the business unit’s assured communication systems segment by over 10 times over 10 years.

Sean Stackley, a 2015 Wash100 awardee, serves as L3Harris Technologies’ president of integrated mission systems. He is responsible for the business strategy, financial performance, execution and growth of his business segment.

L3Harris’ integrated mission systems shop spans a wide portfolio of solutions in power distribution, reconnaissance, electro-optics and aviation, among others.

Prior to his current role, Stackley most recently served as L3Harris’ corporate senior vice president and president of communications and networked systems.

Upon his Stackley’s appointment to the said roles, L3Harris announced it will unify its electronic systems and intelligence, surveillance and reconnaissance segments into new maritime sectors under his leadership.

Before his Navy career, Stackley was a professional staff member of the Senate Committee on Armed Services. He oversaw Navy programs, U.S. Transportation Command matters and Seapower subcommittee matters.

He also advised on Navy and Marine Corps operations and maintenance, science and technology and acquisition policy.

Maria Demaree, a Potomac Officers Club member, serves as the vice president and general manager of Lockheed Martin’s space mission solutions, roles she has held for over two years.

She is responsible for about 4.4K employees and an annual sales base of over $1B in support of government defense and intelligence agencies.

The mission systems division conducts mission-critical efforts such as the development of enterprise, cloud and application-based solutions for mission management, command a control, collection orchestration and tasking, processing, data analysis and analytics.

Demaree previously served as vice VP of engineering for mission systems and operations for Lockheed’s space unit. In the said role, she led about 5K engineers, cyber technologists, mission operators and software engineers.

Prior to the said role, Demaree was the director of mission systems at Lockheed’s information systems and global solutions business area made up of about 3.5K software engineers.

FedScoop inducted Demaree into the 2018 edition of Top Women in Tech. She is also a recipient of the March of Dimes Heroines in Technology Lifetime Achievement award.

Demaree is currently an executive co-chair of the Space Diversity and Inclusion Council and serves on the Zeta board of directors.

Posted on September 8, 2020 by Adrian Rosenberg