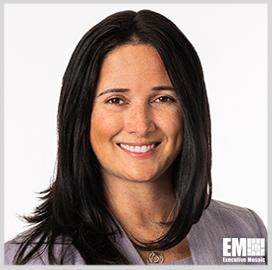 Barbara Borgonovi has been serving as vice president of intelligence, surveillance and reconnaissance systems for Raytheon Intelligence & Space, a subsidiary of Raytheon Technologies, since April 2020.

She oversees the business strategies and operations of the organization’s mission area that designs and manufactures airborne sensors, scanning radar systems and other aircraft services, the company said.

Borgonovi recently led as vice president for the intelligence, surveillance and reconnaissance systems at Raytheon Space and Airborne Systems business unit before the merger with another group Raytheon Intelligence, Information and Services in 2020.

She received in 2017 the Gold Stevie business award for the most innovative woman of the year in manufacturing.

Previously, she served as vice president of operations at Raytheon Space and Airborne Systems, heading the entire operations, functions and support including the facilities and environmental, health, safety & sustainability unit.

Borgonovi was a director for program operations for electronic warfare systems, a mission area within the organization. She directed the segment’s strategy, operational functions, capital management and EWS support.

She also served as deputy of tactical products at Raytheon Vision Systems and became a senior program manager in charge of the portfolio of intelligence, surveillance and reconnaissance systems programs and next-generation army segment.

Borgonovi began her career at Raytheon in 2001. She held various roles in the first seven years, assuming different positions in the supply chain, operations and program management as well as in quality engineering.

She earned her bachelor’s degree in mechanical engineering from California Polytechnic State University and her master’s degree in business administration from Pepperdine University. She is also an alumnae of Raytheon’s leadership development and leadership excellence programs.