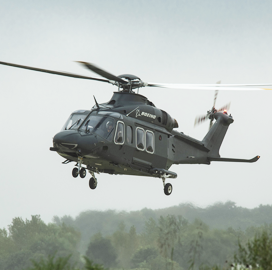 The company secured a supplemental type certificate from the Federal Aviation Administration before it could deliver the aircraft. The certification means the Air Force can start military utility testing for the MH-139A, Breaking Defense reported Monday.

The Grey Wolf is based on Leonardo’s AW139 helicopter. According to Boeing, the aircraft is faster, has greater range, is larger and can lift up to 5,000 pounds more cargo than the Air Force’s UH-1N Huey legacy system.

Mark Cherry, vice president of Boeing’s vertical lift division, said in June that a decision had been made to push initial production to 2023. The original target was September 2021.

The Air Force is expected to buy 80 MH-139As to replace the Huey fleet, five of which are expected to be acquired in fiscal year 2023 for $156 million. The military branch has procured the first eight MH-139As.

The new rotor-wing aircraft will be used for transportation and defending the United States’ nuclear missile silos.