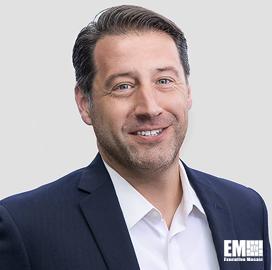 Chris Johnson is a senior vice president at Maxar Technologies and is in charge of the Space Programs Delivery organization.

In the role, Johnson is responsible for leading the delivery of advanced satellites and spacecraft systems to customers within the U.S. government, civil and commercial sectors, according to his profile posted on the Maxar website.

He assumed his SVP role at Maxar in May and is based out of Palo Alto, California, his LinkedIn profile shows.

Prior to joining the space technology company headquartered in Westminster, Colorado, Johnson spent more than two decades at defense and aerospace contractor Boeing.

Most recently, he served as president of Boeing Satellite Systems International, a role he held for three years and seven months. In that capacity, Johnson was responsible for the implementation of the Boeing strategy on satellite system development. He also managed all contracts and services focused on commercial satellites and ground systems.

The industry veteran also led the business development government space systems division of Boeing between 2014 and 2017.

Earlier in his career with Boeing, Johnson was senior manager of business development, serving in the role for almost four years.

Aside from the field of aerospace, he is also knowledgeable in the areas of requirements management, earned value management, system design and systems engineering.