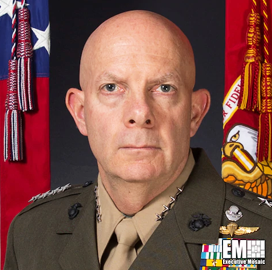 The Woodbine, Maryland, native has held leadership positions at every level after being commissioned as an infantry officer in 1981. He served as the commander of the 8th Marines in Haiti during Operation Secure Tomorrow, the Regimental Combat Team 8 in Iraq during Operation Iraqi Freedom and the 1st Marine Division in Afghanistan during Operation Enduring Freedom.

He was also appointed as the assistant division commander of 2d Marine Division; policy planner in the Strategic Plans and Policy Directorate of the Joint Staff J5; commander of the I Marine Expeditionary Force and Marine Corps Forces, Pacific; and chief of staff for Kosovo Force Headquarters in Pristina, Kosovo, according to Defense .gov.

Other assignments include serving as company commander and battalion operations officer of the 2d Reconnaissance Battalion during Operation Desert Storm and officer selection officer in Roanoke, Virginia.

Posted on January 7, 2021 by Adrian Rosenberg