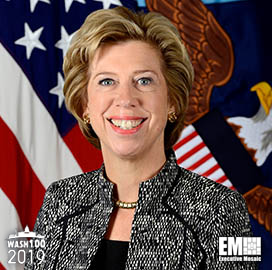 The Department of Defense's plan to replace the way it purchases software with a new "color of money" is garnering support from the department's acquisition workforce and lawmakers, according to DOD's top acquisition official.

Ellen Lord, DOD's undersecretary for acquisition and sustainment, a past Potomac Officers Club event speaker and a four-time Wash100 winner, said she plans to pilot a system that would allow contracting officers to buy software under the department's own "budget activity," FedScoop reported.

“[Software acquisition] policy will reflect a substantial departure from the way of doing things in DOD,” Lord said during a virtual Professional Services Council event.

According to Lord, her proposed software procurement system will be designed for an Agile procurement process instead of conforming to current regulations for buying hardware.

Lord claimed that the Pentagon has already secured Congress' support in authorizing the planned budget activity. Her proposal came as the department is changing policies and creating new programs to speed up its software acquisition process.

“While we are proud of the new software pathways, as an organization we need to continue to learn,” Lord said.

Since September, other regulatory agencies have shown support for Lord's color of money pilots. According to Lord, her office is finalizing its policy and implementation of the innovation board's recommendations.

New career paths for civilian and uniformed officials specific to software acquisition and development are also being created, Lord added.