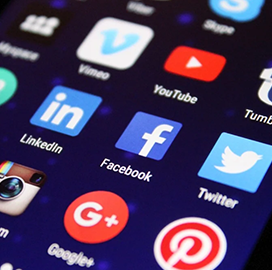 The explosion of digital media over the past two decades has pushed companies to be more aware of their relationship with the public.

With the constantly changing social media landscape, businesses must cope with the increasing number of communications and media channels they need to manage.

Such responsibilities are commonly delegated to the chief communications officer, the “steward of brand reputation,” according to Lynn Kier, vice president of corporate communications at Diebold Nixdorf.

Jason Yaley is the chief communications officer at Parsons Corporation, working out of Washington, D.C. He is a member of the corporation’s executive leadership team and serves as executive sponsor of Parsons’ Diversity, Equity and Inclusion Council, according to his LinkedIn profile.

Yaley is new at Parsons, having joined the firm only in May 2021. In his current role, he is responsible for the company’s global communications and marketing strategy and execution, including media relations and external engagement, advertising, workforce and internal communications, creative services and brand management, corporate philanthropy, memberships and trade associations, digital communications, and corporate events.

Concurrently, Yaley serves as an adviser at INDAIS, a data governance software firm offering a wide range of data compliance and distribution solutions.

Previously, Yaley was chief management officer at Advanced Concepts and Technologies International, where he worked for one and a half years. In that role, he led the human resources, talent acquisition, information technology, enterprise architecture, training, security, facilities and administration, and corporate affairs functions of the company.

Before joining ACT I, Yaley was vice president for membership and strategic development at the Aerospace Industries Association, a job he held for over two years.

Yaley earned his degree in international relations and political science from Syracuse University.

Matt McQueen serves as senior vice president and chief communications and engagement officer at Peraton, a government contractor that specializes in information technology and national security.

Peraton offers technology and engineering solutions to federal clients in the space, intelligence, cyber, defense, homeland security, civil and health sectors, according to the company’s website.

In his role, McQueen serves as Peraton’s senior communications adviser and leads a team of professionals in global engagement and communications.

McQueen joined the company in December 2017 as vice president and chief communications officer. He was promoted to his current role in May 2021, according to his LinkedIn profile.

Prior to Peraton, McQueen spent more than 18 years at aerospace and defense company Northrop Grumman. He served as the director of communications at Northrop’s former cyber and intelligence missions solutions and space intelligence, surveillance and reconnaissance systems divisions.

He was previously Northrop’s sector director for global strategic and external communications, acting as the unit’s primary spokesperson and liaison to external stakeholders. McQueen also held various government and industry relations roles at the company.

McQueen earned a master’s degree in organizational science from George Washington University and a bachelor’s degree in international relations from the College of Wooster.

Maureen Davenport is the chief communications officer at auditing firm KPMG. She has been holding her current leadership role since February 2019.

Davenport used to serve as senior vice president and chief communications officer at the Federal National Mortgage Association. In that capacity, she handled corporate communications and oversaw corporate marketing tasks, according to her LinkedIn profile.

She started her professional career in 1997 as an account executive at the advertising company Ketchum. Other leadership roles that Davenport held are senior vice president of technology at Hill+Knowton Strategies and SVP of communications at the National Association of Manufacturers.

She holds a bachelor’s degree in English from James Madison University.

KPMG offers audit and assurance, tax and legal, advisory and private enterprise services to various industries, including finance, retail, industrial and energy and natural resources. It is headquartered in Amstelveen, Netherlands, and has multiple offices in the Americas, Africa, Asia, Europe and Oceania.

Claire Renner Hassett is the managing director and chief communications officer at Deloitte, working out of Vienna, Virginia. She has led award-winning corporate communications teams in “cutting through the clutter to define, protect and enhance the reputation” of some of the world’s leading brands, according to her LinkedIn profile.

Hassett has been a trusted senior adviser to C-suite leaders of publicly-traded, multinational companies. She is a proven, decisive and strategic thinker with experience in implementing award-winning integrated media relations, issues and crisis management, online media and internal communications programs, her profile further states.

Hassett has been employed at Deloitte for almost eight years. In her current role, she is responsible for leading all aspects of global corporate communications, including building executive eminence and visibility, defining the brand through earned media and social media opportunities across over 150 countries.

Before joining the auditing company, Hassett served as the senior director of corporate affairs at Siemens. In that role, she was responsible for media relations strategy and tactical initiatives in support of Siemens USA’s corporate operations.

Prior to Siemens, Hassett served as a senior communications adviser for public and government affairs at ExxonMobile, a job she held for almost six years. In that role, she was responsible for shaping external media relations and internal communications strategy in support of downstream operations.

Harrett earned her degree in telecommunications from Texas Tech University.

Dean Acosta is the chief communications officer and a senior vice president at Lockheed Martin.

Acosta leads global communications strategies and activities across the company’s business areas in the U.S. and international locations. He advises Lockheed’s leadership about advancements in the aerospace and defense industries to ensure that the company meets its corporate mission.

Acosta first joined Lockheed in 2010 as director of communications before taking up other leadership roles in different companies. He rejoined the aerospace company in 2019 as SVP and chief communications officer.

He started his career in 1990 as a broadcast, print and radio journalist at several U.S.-based media outfits. In 2003, he worked as the chief spokesperson and deputy assistant administrator for public affairs at NASA headquarters.

He holds a master’s degree in strategic communication and leadership from Seton Hall University and a bachelor’s degree in political science from The University of Texas at San Antonio.

Lockheed Martin produces hypersonic systems, aircraft and other offerings for C4ISR, electronic warfare, sensors and integrated air and missile defense. It is headquartered in Bethesda, Maryland, and has multiple offices within and outside the U.S.