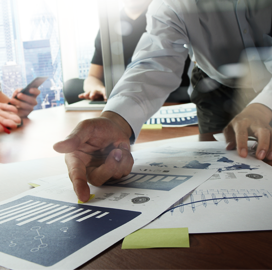 Competitive intelligence is a tool that companies can use to understand trends in their industry and what strategies they must adopt to remain competitive.

Businesses armed with competitive intelligence are better at identifying opportunities and investing resources in the areas that matter most, according to an article that ArchIntel posted.

Competitive intelligence is also highly valuable for informing marketing campaigns, allowing businesses to identify which messages are working and which ones are not.

Candy Quinn is the director of business and competitive intelligence at CACI International. She has been holding her current leadership role since 2015.

The industry veteran was the director of business and competitive intelligence at L-3 National Security Solutions from 2011 to 2015. CACI acquired L-3 NSS in 2016, a deal that was worth $550.

Quinn was a senior market research analyst at Science Applications International Corp. from 2008 to 2010. In this capacity, she provided research and analysis services to the U.S. Army and helped improve business development effectiveness for other customers, according to her LinkedIn profile.

She started her professional career in 1997 as a market analysis manager at DynCorp International, which was acquired by Amentum in 2020. She moved to Federal Sources in 2001 as the director of federal market intelligence and worked as a senior analyst at Hewlett Packard from 2005 to 2008.

CACI offers digital solutions, C4ISR, engineering, enterprise IT and mission support services to clients in the defense, intelligence and sectors. It is headquartered in Reston, Virginia, and has multiple offices in the U.S. and in Europe.

Tom Jennrich is a senior manager of competitive intelligence strategy at Accenture Federal Services, working out of Ashburn, Virginia. He is a CI leader with extensive experience in market research and analysis, capture, corporate strategy and operations planning, business development, public speaking and presentation, and project management, according to his LinkedIn profile.

Jennrich is further described as a dynamic, successful and personable leader with nearly 20 years of professional experience in the highly competitive federal and state sectors. He is “deeply knowledgeable in the federal sector, with experience across all civilian, defense and IC agencies,” his profile states.

Jennrich has been a senior CI manager at Accenture’s federal services business for almost eight years. During this time, he has built the company’s CI function and has led its team of “CI All-Stars.”

Before joining Accenture, Jennrich served as the lead civil market strategy analyst at Booz Allen Hamilton. In that role, he supported the firm’s $1.1 billion civil market, including health, homeland and aerospace agencies, with actionable competitive and market intelligence leading to major captures.

Earlier in his career, Jennrich worked as a federal analyst at the now-defunct Computer Sciences Corporation. In that role, he conducted internal and external research on business, technical and competitive subjects as he monitored competitors, industry events and technologies.

Jennifer Cane is the vice president of competitive and market intelligence, position to win at defense contractor Leidos. She has been holding her current leadership role since September 2021.

She joined Leidos in 2018 as director of competitive intelligence/position to win. She was then appointed as vice president at the same business sector before holding her current position, according to her LinkedIn profile.

Cane started her professional career in 1995 as a finance intern at Lockheed Martin. She handled multiple finance-related leadership positions until 2003.

She took on the role of manager of business development, competitive intelligence and position to win at Lockheed in 2003. In this position, she supported the company’s clients by providing actionable recommendations and evaluating business case opportunities. She also worked to complete Lockheed’s Competitive Intelligence/Positioning-to-Win Institute.

Cane holds a Master of Business Administration degree from Rutgers University and a bachelor’s degree in accounting from the University of Central Florida College of Business.

Leidos offers cyber, digital modernization, integrated systems, mission operations and mission software systems to various clients, including those in the defense, government, intelligence and homeland security sectors. It is headquartered in Reston, Virginia, and has offices within and outside the U.S.

Daniel Pacek is the market and competitive intelligence manager at software company Red Hat, working out of the Boston Metropolitan Area. He is a CI analyst with a deep background in product management, marketing and sales enablement, according to his LinkedIn profile.

Pacek has developed a track record of increasing revenues by developing sales strategies, tools and training to enable companies to successfully position products in the market “in the face of better-funded competitors with larger sales forces and lower-cost offerings.” His market and product insights have been developed through many years of product-to-market experience across a number of industries and extensive background in software engineering, his profile further revealed.

Pacek has been working at Red Hat, an IBM subsidiary, for the past 14 years. He joined the company as a CI analyst before being promoted to his current position six months ago. In his current role, he is responsible for leveraging publicly available research as well as developing unique primary research to develop insights into product development, compelling competitive marketing message creation and business offerings.

Previously, Pacek worked at Sun Microsystems. He held various positions in business development and product marketing during his over nine years with the company.

Earlier in his career, Pacek worked as a software development practices consultant at Tessera, now known as Xperi.

Pacek earned his bachelor’s degree in computer science from the University of Lowell.

Jay Nakagawa is the director of competitive intelligence at Dell Technologies, working out of the Denver Metropolitan Area. He has a successful track record leading product management, marketing, sales, business development and international business endeavors, and has built “high-performance, winning teams” in CI, according to his LinkedIn profile.

Nakagawa has been Dell’s CI director for over nine years. He is credited for removing the company’s CI group from its former sales support function, turning it into a unit dedicated exclusively to delivering insights into the business and its competition. His team continues to provide the company’s leadership with CI visualization on a quarterly basis.

In addition to his job at Dell, Nakagawa also serves as chairman of the advisory board of directors at Strategic and Competitive Intelligence Professionals, an association of American CI practitioners. In this role, he is focused on helping attain strategic objectives, including membership growth and revenue goals along with the organization’s board members, his profile further reveals.

Nakagawa earned his bachelor’s degree in information systems from the University of Colorado Boulder – Leeds School of Business. He later earned his Master of Business Administration degree from Regis University.