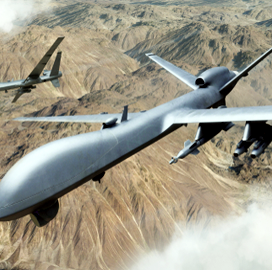 Defense and intelligence technologies have significantly changed since the Cold War. Advancements in computing power and emerging technology areas have resulted in more efficient weapons and the use of unmanned systems.

The government contracting sector has evolved in step with the defense and intelligence communities evolving needs. For instance, the airborne intelligence, surveillance and reconnaissance market is expected to continue growing as countries take additional measures to secure their borders, according to Mordor Intelligence.

Companies are also investing in artificial intelligence, a technology that major defense contractors like Northrop Grumman believe is key to enabling the Department of Defense’s future battle management networks.


Paul Decker, President of Defense and Intelligence at Parsons

Paul Decker serves as the president of defense and intelligence at Parsons, a company that offers a diverse selection of mission-critical products.

The company’s portfolio includes solutions for command and control; data processing and analytics; intelligence, surveillance and reconnaissance; smart infrastructure; and space operations, according to its website.

Decker is responsible for leading his business unit’s project execution, delivery and risk management. He also provides direct executive leadership in organizational strategy, growth and corporate development, according to his LinkedIn profile.

From 2002 to 2011, Decker worked at Northrop Grumman in roles related to cybersecurity and systems security engineering, according to his profile.

He served as a program security manager at the Defense Advanced Research Projects Agency. Decker earned a bachelor of arts in security management from the American Military University.

Decker recently joined the Potomac Officers Club for an exclusive interview, where he discussed his mission-first leadership at Parsons and his views on improving federal processes.

Angela Heise serves as the corporate vice president of defense and intelligence at Microsoft, working out Washington, D.C. She has dedicated the past 20 years to securing enterprises through information technology and advanced cybersecurity programs, having studied computer science and beginning her career in software development, according to her LinkedIn profile.

Heise joined Microsoft in June 2021. Concurrently, she serves as a board member of the insurance company Essent Guaranty.

From 2016 to 2019, Heise served as the president of Leidos Civil, a provider of services and solutions in the defense, intelligence, civil and health markets, where she was responsible for providing solutions to U.S. cabinet-level civil agencies and major elements of the public sector across the globe. Her areas of focus include air traffic automation, energy and the environment, federal infrastructure and logistics, information technology and cybersecurity, and transportation security.

Prior to Leidos, Heise held a number of positions with Lockheed Martin between 1997 and 2016, including vice president of enterprise information technology solutions. In that role, she led the company in securing two major international wins, including IT infrastructure design and implementation for the new NATO headquarters and the Australian Data Center Consolidation Program.

Mary Petryszyn is a corporate vice president and the president of Northrop Grumman‘s defense systems sector. She has been holding this leadership role since January 2020.

As corporate VP and defense systems sector president, Petryszyn oversees the delivery of critical technology services, sustainment and modernization, integrated battle command systems, weapons and information systems. She also works with clients in the national security, military and civilian sectors, according to her LinkedIn profile.

Petryszyn started her career at Northrop in 2013 and has held numerous leadership positions since, including sector VP and general manager of land and avionics C4ISR and sector VP of global strategy and mission systems.

The industry veteran started her professional career in 1999 as the director of engineering at Raytheon. She held multiple directorship and VP roles at Raytheon’s different sectors before moving to Northrop Grumman.

Petryszyn is also a corporate partnership representative at the Society of Women Engineers. She has been with the organization since 2001 and is named a fellow and life member of SWE.

Northrop Grumman offers advanced products and services that support all warfighting domains, from sea to space and cyber. It is headquartered in Falls Church, Virginia, and has multiple offices within and outside the U.S.

Jeffrey Lessner is the vice president of defense and intelligence systems at Hughes Network Systems, working out of Upper Marlboro, Maryland. He has over 35 years of leadership experience in executive management, business development, sales, capture management, project management and engineering, according to his LinkedIn profile.

During his career, Lessner has led the development, deployment and operational support of mission-critical data analytics, imaging, signal processing, data collection, sensors and storage systems for the Department of Defense and the Intelligence Community, his profile further reveals.

Lessner has been leading Hughes’ defense and intelligence business for over six years. This role puts him on top of all DOD and IC opportunities within the company’s Defense and Intelligence Systems Division, from programmatic leadership to business development.

Before joining Hughes, Lessner served as the vice president of business development at the technology company Modus Operandi, where he worked for over three years. In that role, he was responsible for all aspects of the company’s business development efforts, including full oversight of sales and marketing efforts, market analysis, and management of business proposal production.

Lessner earned his degrees in electrical engineering and electro physics from the University of Maryland.

Dave Ziegler is the senior vice president and general manager of defense and intelligence programs at ASRC Federal. He has been holding his current leadership role for over five years.

In his current role, he oversees operations, strategy, business development and profit and loss activities for the company’s defense and intelligence elements. He leads over 700 employees, 13 sites within the continental U.S. and over 50 contracts and task orders across the Department of Defense and the Intelligence Community, according to his LinkedIn profile.

He was a vice president and general manager at ASRC before taking on his current position. In this role, he led strategic direction, business development, finance, team management and contract operations for the company’s technical services.