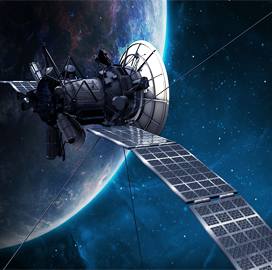 Civil space agencies have increasingly been adopting technologies and best practices that the private sector has already matured. In an effort to modernize critical systems, the National Oceanic and Atmospheric Administration has begun migrating the ground systems of its environmental satellites to the cloud.

The private and academic sectors make up a bulk of the civil space industry, tackling challenges in Earth observation, weather prediction, space exploration and many others. The Potomac Officers Club — a division of Executive Mosaic — presents five government contracting executives in the civil space sector.

Lisa Callahan has been serving as the vice president and general manager of commercial civil space at Lockheed Martin for nearly five years.

She has been with Lockheed for more than 27 years.

Her career with the aerospace company began in 1993 when she was first hired as a program director for training and simulation. Years later, she was assigned to various VP-level positions.

As VP of Aegis ballistic missile defense, she was in charge of all aspects of execution, strategy and growth for domestic and international maritime BMD programs and baselines.

Callahan got another VP stint with Lockheed’s undersea systems business line. In that role, she led the development of next-generation undersea warfare systems, unmanned underwater vehicles and acoustic sensors.

Before joining Lockheed, Callahan worked for seven years as a systems engineering manager at tech company IBM. During that time, she performed front-end requirement analysis and system integration and tests for the Navy’s fast attack submarines.

Callahan attended Virginia Tech, where she obtained a bachelor’s degree in electrical engineering.


Roger Mason, President of the Space and Intelligence Sector at Peraton

Roger Mason, a four-time Wash100 winner, serves as the president of Peraton’s space and intelligence sector, which offers capabilities to customers in the civil space, national security and intelligence communities.

Mason is responsible for executing the space and intelligence unit’s strategy, maintaining strong program performance and achieving growth objectives, according to Peraton.

Mason previously served as senior vice president of national security and intelligence at Noblis, a science and technology organization that provides technical solutions and consultancy services to federal clients.

Mason had also served as assistant director of national intelligence for systems and resource analyses within the Office of the Director of National Intelligence, according to his LinkedIn profile.

He was awarded the National Intelligence Distinguished Service Medal for his contributions to the Intelligence Community’s operations research, decision sciences and business analytics.

Makenzie Lystrup is the vice president and general manager of civil space at Ball Aerospace.

She has been with the aerospace company since January 2016 and first served as business development manager for the space sciences and technologies unit, according to Lystrup’s profile posted on the Ball website.

Before becoming the leader of the company’s civil space sector, Lystrup spent three years as director of civil space advanced systems and business development. She led the business unit strategy and growth for NASA, the National Oceanic and Atmospheric Administration, the U.S. Geological Survey and other civilian government agencies, as well as organizations within the private sector.

Lystrup is also the former director of space sciences, a position she held for one year, her LinkedIn profile shows.

Earlier in her career, the Ball executive spent one year at the House of Representatives as a congressional science policy fellow from the Acoustical Society of America and the American Institute of Physics.

Between 2008 and 2011, she worked as a principal investigator for a $231,000 grant at the university, where she focused on planetary science, space weather, astronomy, space physics, atmospheric chemistry and dynamics.

The industry veteran received her bachelor’s degree in physics from Portland State University. She also holds a doctorate in astrophysics from University College London.

Kalirai is primarily responsible for APL’s space-science research programs under civil space. He leads efforts supporting missions dedicated to meeting decades-long challenges in space exploration, according to his LinkedIn profile.

The James Webb Space Telescope is billed as the largest, most powerful and complex space telescope to be launched in space.

He is also a former Hubble fellow postdoctoral researcher at University of California Santa Cruz.

He completed his bachelor’s degree in honors physics and astronomy from the University of British Columbia. He continued his postgraduate studies at UBC and earned a master’s degree and a doctorate in astrophysics.

Dylan Taylor serves as the chairman and CEO of Voyager Space Holdings, a holding company focused on integrating companies in the space industry.

Taylor is known as a private space investor who has bet on emerging ventures such as Accion, Kepler, York, Astrobotic, Made in Space, Relativity and Planet, according to his website.

Before joining Voyager in 2019, Taylor served as a director for Kansas-based UMB Bank and as a mutual fund director for the Jackson Funds.

He has authored space-related pieces for SpaceNews, ROOM, The Space Review and Space .com. He also regularly appears on Bloomberg, Fox Business and CNBC.

In 2011, the World Economic Forum recognized Taylor as a Young Global Leader. The Aspen Institute also named him a Henry Crown Fellow in 2014.

According to his LinkedIn profile, Taylor founded Space for Humanity in 2017 to advance the democratization of space exploration and develop solutions for global problems.