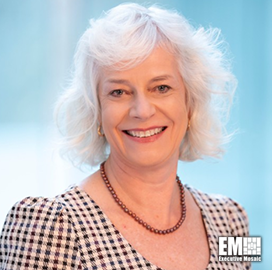 Dawn Meyerriecks, a speaker at a past Potomac Officers Club POC event, has been named a senior visiting fellow at Mitre, a nonprofit organization that manages federally funded research and development centers.

Mitre’s Visiting Fellows program engages with nationally recognized leaders in the fields of national defense, cybersecurity and health. Visiting fellows contribute to Mitre’s research programs and provide advisory support on its strategic areas of focus, according to the organization’s website.

Meyerriecks is a former deputy director of the CIA’s Directorate of Science and Technology, Mitre said Tuesday. CIA DS&T specializes in applying scientific and engineering solutions to foreign intelligence missions.

Prior to joining the agency, Meyerriecks served as deputy director of the Office of the Director of National Intelligence for Acquisition, Technology and Facilities.

She was previously vice president of AOL-branded products at AOL, a New York City-based media and technology company.

From 1998 to 2004, Meyerriecks served as the chief technology officer at the Defense Information Systems Agency, according to her LinkedIn profile.

She is credited with helping modernize the Global Command and Control System between Desert Storm I and II. Prior to DISA, Meyerriecks served as a project manager at NASA’s Jet Propulsion Laboratory.