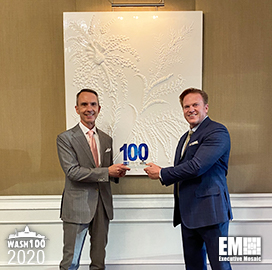 Andrew Hallman, former principal deputy director for the Office of the Director of National Intelligence, has received his first Wash100 award from Executive Mosaic.

Executive Mosaic CEO Jim Garrettson presented the award to Hallman, a past Potomac Officers Club event speaker, in recognition of efforts to develop new security and cybersecurity initiatives in both the public and private sectors.

“The vital intelligence our IC professionals provide to the nation’s leaders will continue to protect Americans and defend the values for which so many have paid the ultimate sacrifice. The excellence that is the keystone of the IC — the hallmarks of our work — will continue to thrive,” Hallman said as he stepped down from ODNI in February.

From ODNI, he rejoined the CIA to serve as the deputy for digital innovation, overseeing digital and cyber integration efforts across the agency's mission areas.

The plan included a new approach to counterintelligence in response to the rapid evolution of threats since the last edition of the strategy in 2016.

Before he joined ODNI, Hallman served as the director of the CIA's Office of Transnational Issues, where was responsible for leading analysis of global national security challenges and for developing advanced analytics.