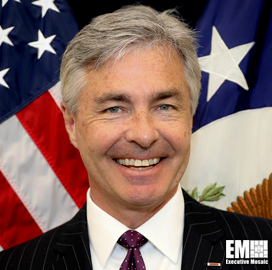 Kenneth “K.J.” Braithwaite has been named as the new Navy secretary following a confirmation by the Senate via voice note on Thursday. Braithwaite succeeds Richard Spencer, a two-time Wash100 winner, who was ejected from office due to his handling of a legal case against a Navy SEAL charged with multiple war crimes.

The Senate confirmation comes on the heels of the Navy’s recent slew of controversies, which Braithwaite vowed to overcome by improving public trust in leadership, Defense News reported.

Speaking at his confirmation hearing, Braithwaite lamented the Navy’s current situation, mainly the “tarnished” culture within the service’s ranks.

“It saddens me to say the Department of the Navy is in troubled waters due to many factors, primarily the failings of leadership,” he said.

Braithwaite referenced some of the most recent controversies within the service, one of which involved the mishandling of a coronavirus outbreak on the aircraft carrier Theodore Roosevelt. Former acting Navy Secretary Thomas Modly drew flak for the incident over his decision to dismiss the ship’s commanding officer, followed by a caustic speech to crew members applauding the ejected captain. The new Navy secretary also touched on the Navy’s other missteps, including the pair of deadly Navy ship collisions in 2017 and the unresolved “Fat Leonard” contracting corruption scandal.

Braithwaite enters the Navy baked by his experience as a former U.S. ambassador to Norway, in which he prioritized the security of the Arctic region. During his nearly two-and-a-half-year tenure as ambassador, he was able to convince Oslo to meet the NATO spending target of 2 percent of annual gross domestic product on defense. He also served as an anti-submarine warfare pilot, in addition to taking on various communications and legislative roles.