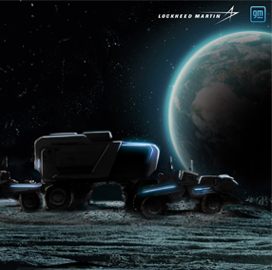 The lunar terrain vehicle is one of many types of surface mobility vehicles to be used for NASA’s Artemis program, which is aimed at landing the first woman and person of color on the Moon by 2024.

Astronauts aboard the LTVs are expected to be able to explore the lunar surface farther than ever before and exceed the 4.7 miles covered by previous Apollo rovers, Lockheed said Wednesday.

The vehicles are also hoped to support astronauts’ journey to the Moon’s south pole, which has not yet been explored.

Lockheed and GM will combine their expertise and leverage prior experience working with NASA on various spacecraft projects.

Lockheed has over 50 years of partnership experience with the space agency. The aerospace company is the prime contractor tasked with building the Orion spaceship, which is designed with life support, navigation, communications and radiation shielding to facilitate deeper space explorations.

The existing contract calls for the delivery of up to 12 Orion spaceships. The first spacecraft to be delivered under the contract is called Artemis III.

GM has also worked with NASA in the past. The vehicle manufacturer was involved in testing and integrating the inertial guidance and navigation systems for the entire Apollo Moon program.

In addition, the company developed the chassis and wheels for the electric lunar roving vehicle that was deployed for Apollo 15 through 17.