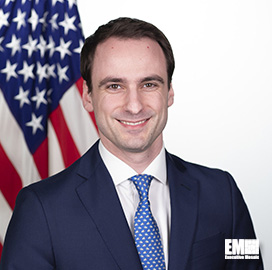 Michael Kratsios to Serve as Defense Undersecretary for Research, Engineering

The Department of Defense has confirmed that Federal Chief Technology Officer Michael Kratsios, a two-time Wash100 awardee, will serve as the agency's acting undersecretary for research and engineering.

In a statement, DOD Secretary Mark Esper, a three-time Wash100 awardee, said the Kratsios is “someone with experience in identifying and developing new technologies and working closely with a wide range of industry partners."

Mark Lewis, director of defense research and engineering for modernization, will serve as Kratsios' acting deputy.

Kratsios, who is the deputy assistant to the president at the White House Office of Science and Technology, will also serve as the Pentagon's acting chief technology officer.

The Pentagon previously confirmed that CTO Mark Lewis and his deputy, Lisa Porter, would leave the agency to join the private sector.

He will retain his role at the White House while serving in his new DOD assignment.

He earned a bachelor's degree from Princeton University and was a visiting scholar at Tsinghua University's School of Economics and Management, according to his LinkedIn profile.