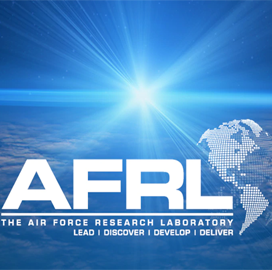 According to Ben Gleason, lead fabrication technician, the machines come with identical CNC control units for faster operator training and are equipped with accurate spindles and electronic part probing to lessen setup time and increase precision.

“The unique skills of these devices allow them to machine tight tolerances with exotic materials such as superalloys, additively manufactured metals, polymers and composites,” said Lt. Col. Ammy Cardona, AFRL branch chief and materiel leader for the Experimental Demonstration Branch.

Having the capability to produce such components will help scientists and engineers to test new technologies.

Recently, AFRL and Aerojet Rocketdyne conducted a design verification test of the next-generation large solid rocket motor eSR-19 at Edwards Air Force Base in California. The trial followed the evaluation of the eSR-73 motor in 2021. Aerojet Rocketdyne said the eSR-73 demonstration served as a pathfinder to manage and manufacture large solid rocket motors.

The eSR-19 motor test was aimed at upgrading the existing SR-19 equipment used in the Minuteman II intercontinental ballistic missile.