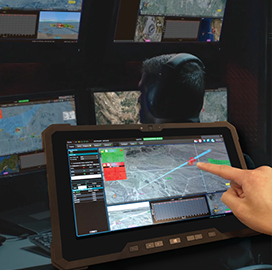 The U.S. Air Force used a command and control management application during the Cope North 2022 multinational exercise from Feb. 2 to 18.

A week before Cope North 2022, Kessel Run officials flew to Guam to provide training on how to use C2IMERA. Trainers zeroed in on each unit’s specific needs, the Air Force Materiel Command said.

Gwenn Haden, operations engagement lead official for the C2IMERA team, said the group was able to fully showcase the platform’s capabilities when users were plugging in their data. The exercise allowed different units to use the application collaboratively and in real-time.

The two-week exercise included fighter aircraft from USAF, the Japanese Air Self-Defense Force and the Royal Australian Air Force. The Pacific Air Forces also supported the use of C2IMERA throughout the exercise.