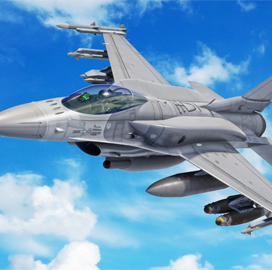 The Air Force delivered a software update to an airborne F-16 Fighting Falcon during a recent Advanced Battle Management System demonstration at Nellis Air Force Base.

The flight test pilot was able to receive an in-flight mission data file update from the Hill Software Integration Lab through a connection provided by an existing beyond line of sight F-16 satellite communication system.

A custom developed center display unit software enabled the processing of the transmitted data, which was then loaded into the F-16’s countermeasures signal processor, AF .mil reported.

The proof-of-concept test enabled the pilot to properly correlate a previously unknown electronic threat in near real-time.

According to Lt. Col. Zachary Probst, commander of the 84th Test and Evaluation Squadron, the flight test marks the first time an airborne fighter aircraft received a software update and new capability.

“This is a big deal. There’s a tactical need to be able to rapidly update software, especially mission data files because that’s what ties into our ability to identify, find, and defend ourselves against enemy threat systems,” Probst said in a statement.

The demo falls under the Air Force’s ABMS effort, which is aimed at establishing a network of connected technologies to promote data sharing between weapon systems.

A prior ABMS field test carried out in March marked the first time the Air Force utilized artificial intelligence in the kill chain.

During the test, fighter jets were able to pull data from the Army and Navy, as well as international military assets, to guide their missiles. AI algorithms were then used to help the jets zero in on a target.

Posted on August 2, 2021 by Adrian Rosenberg