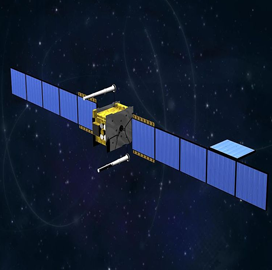 John Sherman, the Department of Defense’s chief information officer, said that defending assets in space from cyberthreats is a growing source of concern in view of the rise of near-peer adversaries like China and Russia. In response to such threats, the DOD is taking take into consideration the security of its space assets when developing a zero-trust security framework across its enterprise, FedScoop said Thursday.

Speaking at AFCEA NOVA’s Space Force IT Day, Sherman said the adoption of a zero-trust framework is a top priority for his office. He stressed that enhanced cybersecurity, in order to be truly effective, cannot be limited to the terrestrial domain, saying the “space piece is a critical part of this discussion.”

Sherman said that the Pentagon has taken its cue from President Joe Biden’s cybersecurity executive order in May 2021. The EO points out that the United States faces persistent and increasingly sophisticated malicious cyber campaigns that threaten the public sector, the private sector, and ultimately the American people’s security and privacy.  The federal government must improve its efforts to identify, deter, protect against, detect, and respond to these actions and actors, Biden said in the document.

The Pentagon’s CIO said the cybersecurity model his office is trying to emulate is the Defense Information Systems Agency’s Thunderdome program. In January, DISA awarded Booz Allen Hamilton a $6.8 million contract to implement a Thunderdome Prototype. Under the six-month deal, DISA will operationally test how to implement the Zero Trust Reference Architecture through utilizing commercial technologies like Secure Access Service Edge and Software Defined-Wide Area Networks.

Sherman said that cybersecurity has to be considered a survivability imperative. He compared the application of zero-trust to the DOD’s terrestrial and space data assets to the use of chaffs, flares and armor to its aircraft and tanks.