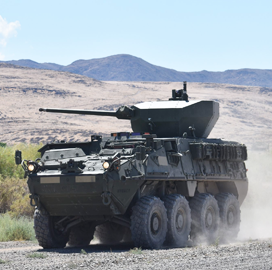 The Army is on track to field its Directed Energy-Maneuver Short-Range Air Defense system, which will be equipped onto Stryker infantry carrier vehicles.

Marcia Holmes, deputy director of hypersonics, directed energy, space and rapid acquisition at the Army Rapid Capabilities and Critical Technologies Office, told reporters that the service is committed to maintaining its expedited project schedule through rapid prototyping, noting that the first iteration may not be the absolute perfect solution.

According to Holmes, the plan is to deliver four prototype Stryker vehicles integrated with the lasers in fiscal year 2022, National Defense Magazine reported.

Soldiers recently concluded a summer exercise at Fort Sill in Oklahoma, where they used a laser-equipped Stryker for a shoot-off.

He noted that soldiers were able to demonstrate proficiency in using the DE-M SHORAD weapons system within days.

The Army has been busy with Stryker vehicle upgrades as of late.