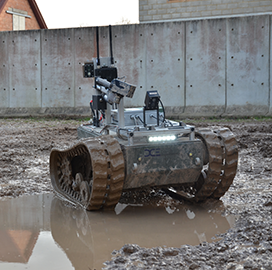 U.S. Army researchers are developing spectrum visualization technology that will provide the ability to maintain control over remotely controlled vehicles at greater distances, effectively avoiding “orphan robots” on the battlefield. The technology was originally conceived as a means of maintaining communications with dismounted soldiers caught up in the flurry of war, Signal Magazine reported Wednesday.

The technology, called Network Coverage Overlay, was evaluated by Army decision-makers during the recent Network Modernization Experiment at Joint Base McGuire-Dix-Lakehurst in New Jersey. Nicknamed “Nico,” the technology improves network situational understanding of units within communication range by displaying radio coverage on a digital map within a soldier’s handheld device and within a tactical vehicle’s Mounted Family of Computer Systems.

The Army’s Command, Control, Communications, Computers, Cyber and Intelligence, Surveillance and Reconnaissance Center developed the application, which can calculate for terrain, elevation and distance, and can plot courses that will guide disconnected soldiers back into communications range. This capability is now being put in the hands of soldiers on board a future combat vehicle as a means of maintaining control over wayward unmanned systems.

Archie Kujawski, who leads the C5ISR Center’s Future Radio Concepts Team, told defense reporters that a big problem confronting his team is that robots are only useful until the link with it dies, and when that happens, the robot becomes ”orphaned.” Nico will allow soldiers to see where they do or do not have communications coverage, which, in turn, will warn them not to push the robotic systems out of range.

John Franklin, the C5ISR Center‘s Physical Layer Signal Processing Branch chief, told reporters that even autonomy systems may need some situational understanding of its radio frequency coverage. The technology could also be used to allow one operator to better control multiple robotic systems, it was added.