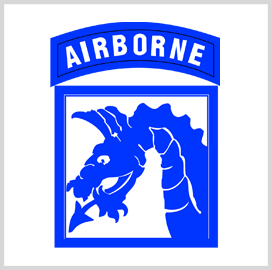 The U.S. Army XVIII Airborne Corps will partner with the Army Futures Command for the seventh Dragon’s Lair competition, which is slated for Aug. 16.

Innovators across the Army and other Department of Defense military services are invited to showcase their ideas and concepts before civilian technical experts and senior military leaders. The technologies that the Army is looking for should support the corps’ modernization and readiness efforts.

Interested and qualified participants have until July 24 to submit their ideas through the Airborne Corps website, the Pentagon said.

In the fifth iteration of Dragon’s Lair, the Army chose an artificial intelligence-powered aircraft training system developed by 1st Lt. Mahdi Al-Husseini, the director of innovation of the 25th Combat Aviation Brigade. His solution is a suite of hardware and software that help pilots perform a series of maneuvers and gives personnel instant feedback to ensure that they meet mission objectives.

Dragon’s Lair was established in August 2020 to solicit innovative solutions that would benefit warfighters and their families. It emulates Shark Tank, an American business reality show where competitors pitch their ideas before a panel of experts who would then decide if their proposals are worth investing on.

Other technologies that came from the competition are body armor cooling systems, an algorithm for predicting building layouts, an application that supports servicemen’s family members and armor vehicle safety systems.