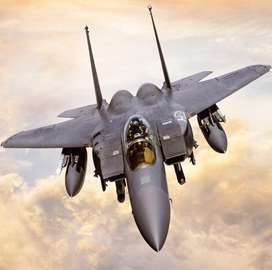 BAE Systems is set to begin low-rate initial production of the F-15 Eagle Passive Active Warning and Survivability System under the terms of a $58 million contract awarded by Boeing.

In a statement, F-15 EPAWSS program manager Lt. Col. Dan Carroll said the system will improve the survivability and utility of the F-15.

The Air Force conducted a series of EPAWSS tests, including flight tests, ground tests and technology demonstrations, before green-lighting the system’s initial production.

The initial tests were completed in April 2019 at the Benefield Anechoic Facility on Edwards Air Force Base in California. The tests were a collaborative effort between the F-15 System Program Office at Wright-Patterson AFB in Ohio, Boeing, BAE Systems and other Air Force components.

Incremental updates were provided to the system throughout its development. New geolocation and threat identification capabilities were added to EPAWSS during its engineering and manufacturing development phase.

BAE Systems has invested in manufacturing capabilities and workforce expansion efforts in anticipation of the initial production of EPAWSS. The aerospace company has spent more than $100 million on EW laboratories and factories and has grown its workforce of innovative, mission-focused experts.