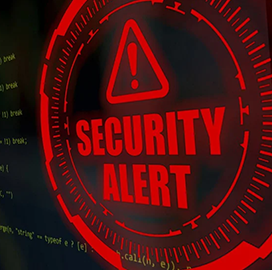 The Cybersecurity and Infrastructure Security Agency said it has detected malware from an advanced persistent threat that had been compromising an entity’s enterprise network since at least March 2020.

The threat actor then exploited several user accounts without multi-factor authentication to breach the VPN device. The government has not yet determined how the hackers obtained the initial credentials.

CISA believes that the advanced persistent threat is separate from the one linked to the previous SolarWinds hack that affected at least nine federal agencies and hundreds of American companies.

The threat actors behind the SolarWinds hack were able to gain access to multiple public, private and government sector entities by exploiting trojanized updates to the Orion software.

Since the SolarWinds Orion hack was discovered in December, the Department of Homeland Security has introduced a new tool designed to detect post-threat compromise activity resulting from the attack.

CISA advised organizations that find Supernova on their SolarWinds installations to deal with the matter separately.

In its own advisory, SolarWinds said Supernova is not embedded within Orion as a supply chain attack and is instead placed directly on a system hosting the platform.