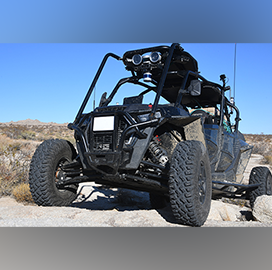 California-headquartered Intel Federal has been awarded by the Defense Advanced Research Projects Agency an opportunity to develop advanced simulation solutions for off-road autonomous ground vehicles. The effort will be carried out with the help of Intel Labs and other collaborators, the Spain-based Computer Vision Center and the University of Texas at Austin, Intel said Tuesday.

In a statement, Intel said that DARPA’s Robotic Autonomy in Complex Environments with Resiliency Simulation program aims to create the next generation off-road simulator, with the goal of significantly reducing the cost of development and “bridge the gap between simulation and the real world.”  It includes two phases that over a period of 48 months seek to compress the entire research and development process for designing off-road autonomous ground vehicles.

In phase one of RACER-Sim, Intel said its focus will be to create new simulation platforms and map generation tools that mimic complex off-road environments with the highest accuracy. Intel Labs’ simulation platform will be used to enable the customization of future maps, including the creation of massive new environments.

During phase two, Intel said it will work with other RACER collaborators in attempting to further fast-track the research and development process by implementing new algorithms without the use of a physical robot. This phase will also include the development of new “sim2real techniques” – the concept of training the robot in simulation to acquire skills and then transferring these skills to a corresponding real robotic system.

Intel said that while many simulation environments exist today, few of them are optimized for off-road autonomy development at scale and speed.