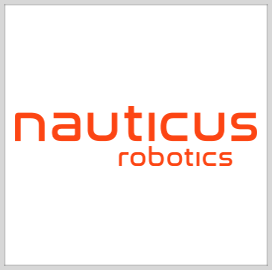 Houston-headquartered Nauticus Robotics announced that it has been awarded an Other Transaction Agreement by the Defense Innovation Unit to prototype its proprietary autonomous command and control software platform called ToolKITT aboard the Navy’s new multi-mission underwater drone. Specifically, the deal calls for testing the platform on the VideoRay Mission Specialist Defender Remote Operated Vehicle, Nauticus said Tuesday.

In a statement, the company said that while the latest prototype OTA deal was awarded competitively, the success of the current project opens doors for subsequent contracts that may be awarded by the government without further competition.

Todd Newell, senior vice president of business development at Nauticus, said the company believes that it has developed a disruptive technology platform within the ocean services market that can result in reduced personnel requirements, cost and environmental impact.

Nauticus said that ToolKITT was developed through internal investments and advancements sponsored by commercial and government customers. The company described ToolKITT as a unified software platform utilizing advances in autonomous behaviors to identify, classify, and perform complex underwater activities which help keep warfighters out of harm’s way.

Furthermore, ToolKITT was specifically designed for ease of integration to enable autonomy across multiple robotics platforms and is also used in Nauticus’ flagship product, Aquanaut.

ToolKITT’s intended host, the Mission Specialist Defender, was designed for more precise control of the vehicle position and orientation and heavier payloads. It can perform demanding intervention missions such as defusing unexploded ordnance or cleaning nets for offshore fish farms. With seven thrusters, the Defender is able to move in any direction and maintain active pitch to face the vehicle in an upward or downward orientation, according to its manufacturer.