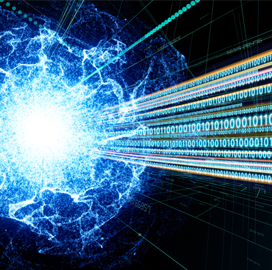 The Department of Energy has earmarked $61 million in funding for the development of new quantum devices and a quantum internet.

Energy Secretary Jennifer Granholm said DOE’s national laboratories are leading research in QIS and are poised to strengthen the United States’ global competitiveness in the field.

“Harnessing the quantum world will create new forms of computers and accelerate our ability to process information and tackle complex problems like climate change,” Granholm added.

DOE said a quantum internet would use networks that take advantage of the quantum properties of light, which allow greater amounts of information to be encoded than in classical computing.

A quantum internet would be able to link together future quantum sensors and share data between quantum computers, in addition to providing greater security.

The department will distribute the funding across three lines of effort. For the first one, DOE will award $30 million across its Nanoscale Science Research Centers to develop infrastructure and capabilities for nanoscience-based research.

In the second line of effort, scientists will receive $6 million to study and develop new devices for sending and receiving quantum network traffic.

DOE will also invest $25 million in the research, design, development and demonstration of regional-scale quantum networks.

The final item is expected to advance the foundations of quantum internet devices and protocols as well as techniques for quantum error correction at scale.