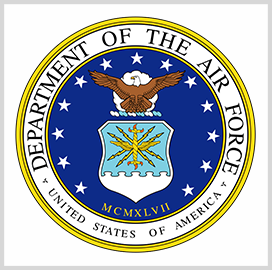 Frank Calvelli, a former national intelligence official, has been sworn in as the Department of the Air Force’s assistant secretary for space acquisition and integration.

Calvelli plans to promote collaborative development in the department and improve its ability to rapidly deliver new systems to the U.S. Space Force.

DAF Secretary Frank Kendall, a three-time Wash100 winner and a scheduled speaker at an upcoming Potomac Officers Club event, said that Calvelli’s expertise will help the Space Force acquire the capabilities it needs to outpace its challenges.

Calvelli will also work with partners in the Department of Defense, the broader U.S. government and international partners in fielding weapons for warfighters, Kendall’s office said.

According to company’s website, Calvelli strengthened client relationships and supported businesses in the space, intelligence and defense communities.

He was the National Reconnaissance Office’s principal deputy director from July 2012 to October 2020. According to the White House, he provided day-to-day management for the NRO and oversaw a space portfolio that covered satellite systems acquisition, systems engineering and satellite mission operations.

Calvelli earned a bachelor’s degree in computer science from the State University of New York at Potsdam as well as a master of business administration from Loyola University Maryland.