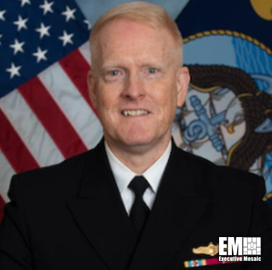 The Senate has confirmed Navy Vice Adm. Frank Whitworth, a 2022 Wash100 winner, as the eighth director of the National Geospatial-Intelligence Agency. He was nominated by President Joe Biden in early January.

Whitworth will succeed two-time Wash100 winner Vice Adm. Robert Sharp, who has been holding the NGA directorship since February 2019. The newly confirmed NGA chief is a seasoned leader who has held multiple positions across the U.S. military.

Whitworth previously served as the commander of the Joint Intelligence Center Central and was the commanding officer of the Navy element of the U.S. Central Command, St. Louis Business Journal reported.

Whitworth was the director of intelligence for Joint Special Operations Command at the U.S. Africa Command. He was also a lead official for a special operations task force in Afghanistan.

The newly confirmed NGA director holds a master’s degree in national security studies from Georgetown University and a bachelor’s degree from Duke University.

The agency is constructing a new headquarters in St. Louis, Missouri. The new site could be complete by 2024 and could host up to 3,000 employees who are currently working at the organization’s site in Soulard, Missouri.

Posted on February 7, 2022 by Lawrence Carter