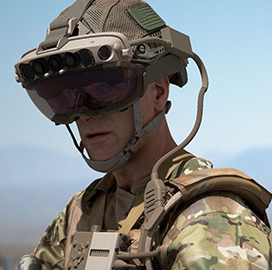 IVAS Goggles Expected to be Fielded by September 2022

Marines are expected to receive their first batch of Integrated Visual Augmentation System goggles as scheduled in 2022 despite rollout delays caused by inconsistencies in the heads-up displays and moisture control problems in the device.

The IVAS program, headed by the Army’s Program Executive Office-Soldier, is aimed at providing warfighters with enhanced situational awareness as it generates a three-dimensional map of the battlefield and offers features to see through smoke and almost complete darkness, as well as rapid target acquisition.

The goggles were originally scheduled for fielding in early 2022 but technical issues prompted more testing, with the first units now slated to be equipped in September. According to PEO Soldier Commander Maj. Gen. Anthony Potts, the additional tests were done out of an abundance of caution, Defense News reported.

Potts said in an interview with Army Times that the Army is pushing for a wider field-of-view than ever before available on a night vision device. The goal was to provide soldiers with an 80-degree field of view but the IVAS goggles started losing resolution when officials attempted to stretch out to that peripheral vision.

According to Potts, Army scientists are working to resolve the “screen door effect” created by the goggles, which throws off the user’s accuracy.

Besides troops from the Army and the Marine Corps, the mixed reality goggles are also slated for fielding to special operations forces.

Posted on December 27, 2021 by Adrian Rosenberg