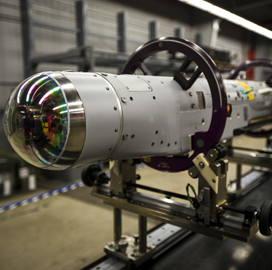 In a test held on Nov. 2 at the Utah Test and Training Range, four F-15E Strike Eagle jets targeted and hit four moving vehicles on the ground.

Alison Howlett, director for the StormBreaker program at Raytheon Missiles and Defense, said stress-testing the weapon in an operational environment will give the company confidence that it meets the military’s requirements and is capable of hitting targets in difficult conditions, Defense News reported Wednesday.

The GBU-53/B StormBreaker is a 204-lbs missile that measures 69 inches long and 7 inches in diameter. It comes with a 105-lbs warhead and comes with a combination of millimeter-wave active radar homing, semi-active laser guidance, infrared homing, GPS-coupled inertial guidance and data link technology. The missile is capable of striking stationary and moving targets up to 69 miles and 45 miles away, respectively.

A press release from the Air Force said the bomb’s connectivity suite allows operators to redirect to a new target even after launch. The military branch added that the overall design package allows a single F-15E to carry up to 28 missiles. The combination of lethality and transportability allows the jet to strike multiple targets accurately. USAF noted, however, that the additional capabilities that StormBreaker brings require more coordination and planning. According to the service, intelligence airmen are needed to load encrypted communication information into the bomb’s computer to allow the aircraft to communicate with it.