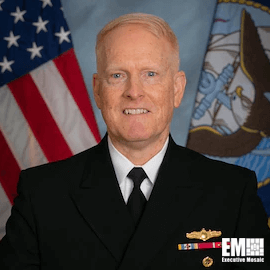 President Joe Biden has nominated U.S. Navy Vice Adm. Frank Whitworth, the current director of intelligence at the Joint Chiefs of Staff, as the director of the National Geospatial-Intelligence Agency. If confirmed, he will replace Vice Adm. Robert Sharp, who has been serving as NGA director since 2019.

Under Sharp’s leadership, the NGA has emphasized using commercial satellite services and technologies. Sharp, a two-time Wash100 winner, also urged companies to focus on artificial intelligence, automation and augmentation solutions to support the agency. The organization also launched a technology accelerator in St. Louis, Missouri, to help companies work with the agency to solve problems.

The NGA is responsible for analyzing satellite imagery for the Intelligence Community and the national security community. It takes raw satellite imagery collected or acquired by the National Reconnaissance Office and other partner companies and processes them into intelligence products.