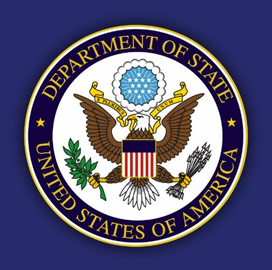 Keith Jones to Step Down as CIO of State Department

Keith Jones is set to step down from his role as chief information officer of the Department of State. He joined the department in January 2021 to provide technology strategic direction. According to his State Department profile, he oversees a $2.4 billion portfolio of technology programs.

Jones will leave his post on June 17 to return to the private sector. His deputy, Glenn Miller, will serve as the department’s CIO in an acting capacity, Homeland Security Today reported.

Before joining the State Department, Jones served as the president and CEO of Edgewater Group, a real estate consultancy provider.

He was also a principal consultant at Deep Water Point and a valued strategic adviser for the Government Technology & Services Coalition, where he helped clients develop business strategies for government customers.

Jones has more than 36 years of experience in the federal government. He spent more than a decade at U.S. Citizenship and Immigration Services, where he served as CIO and principal deputy CIO.

He previously served for nearly six years as deputy CIO at U.S. Immigration and Customs Enforcement, according to his LinkedIn profile.

According to the State Department, Jones founded ICE’s Career Connections Mentoring Program in 2008. The move sought to form mentoring partnerships across the agency to enhance employee skills.

Jones earned a master’s degree in public administration from the American University in Washington, D.C. He is a member of the government’s Senior Executive Service.