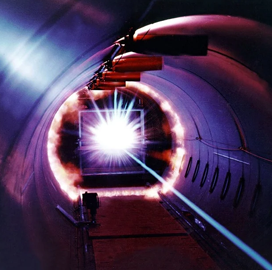 Lockheed Martin has delivered a 300-kilowatt-class laser to the Office of the Undersecretary of Defense for Research and Engineering.

The laser will be integrated with the Department of Defense‘s demonstration efforts, including the U.S. Army’s Indirect Fires Protection Capability-High Energy Laser Demonstrator system. Lockheed says the solution is the most powerful laser system it has produced.

The aerospace company develops lasers that improve detection, threat defense and engagement capabilities while minimizing exposure. According to the company, lasers have been developed to track and destroy targets like unmanned aerial vehicles, small rockets and land- and sea-based vehicles.

Lockheed’s laser systems have been installed on planes, ships and ground vehicles.

Lockheed is not the only company to have made progress on the HELSI effort. In July, Northrop Grumman completed a design review for a high-energy laser prototype that can support up to 1 megawatt.

Northrop achieved the milestone under a $72 million HELSI contract awarded in 2021.

Lockheed Martin offers aircraft, directed energy, artificial intelligence, hypersonics, C4ISR and other products and solutions that support all warfighting domains. It is headquartered in Bethesda, Maryland, and has offices within and outside the U.S.