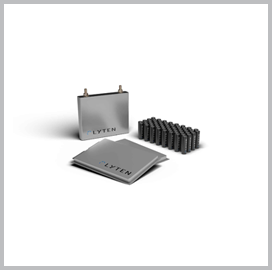 Advanced materials company Lyten announced that it has been awarded a contract by the Department of Defense’s National Security Innovation Capital program to aid in expanding the capacity of its domestic battery prototype manufacturing and production capabilities.

The NSIC program aims to provide funding to startup companies and accelerate product development for innovations that can be used for both commercial and national security applications, Lyten said Tuesday.

The multimillion-dollar award from NSIC is expected to help hasten the market release of LytCell lithium-sulfur batteries by increasing the number of cells that can be produced at the pilot production line, currently being built at the company headquarters in San Jose, California, Lyten said.

The company’s advanced battery chemistry is one of several other next-generation projects currently being funded to ensure the DOD’s pipeline of national security innovations continues to thrive.

In a statement, Shawn Black, president of government, aerospace and defense at Lyten, expressed confidence that the extensive capabilities of the firm’s lithium-sulfur batteries, in comparison to conventional lithium-ion batteries and even solid-state, will revolutionize the aerospace and defense sector, electric vehicle industry, and many others.

The company further revealed that it has been developing a three-dimensional graphene material that significantly improves rechargeable commercial batteries. Lyten further explained it will be able to achieve three times the gravimetric energy of lithium-ion batteries by formulating and tuning a single layer of carbon atoms organized in a hexagonal lattice, called 3D Graphene, at the molecular level and adding it to its proprietary Li-S chemistry.

Earlier in January, Lyten announced that it had secured an other transaction agreement in support of the Defense Innovation Unit around high-specific energy storage and management solutions.