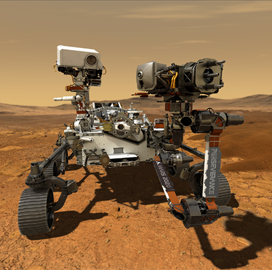 American and European scientists studying the Martian surface may have to wait a few more years before receiving pristine soil and rock samples from the Red Planet. The National Aeronautics and Space Administration’s Perseverance Rover has collected the samples from Mars’ Jezero Crater. The samples are now awaiting pickup for their trip to Earth, Space .com reported Tuesday.

Under an earlier and tentative plan, a Sample-Return Lander carrying a NASA Mars ascent vehicle and a European Space Agency-built “fetch rover” would be launched in 2026 to pick up the scientific cargo. The fetch rover would then pick up a container holding Perseverance’s samples and bring them back to the MAV, which would launch them into Mars orbit. From there, the sample container would be transferred to an ESA Earth-return orbiter, which would bring the material back to Earth in 2031.

Subsequent analysis of the Mars samples conducted remotely through Perseverance revealed that they were much heavier than what scientists previously anticipated. It was subsequently decided that bringing the samples back to Earth would require a second SRL.

To pay for additional costs, NASA has asked Congress for an additional $822 million in funding for the second SRL in its fiscal year 2023 budget. The space agency is seeking a total of $26 billion to finance its operations in the next fiscal year, which begins Oct. 1.

In a note accompanying the budget request, NASA officials said that its need for more money to finance the Mars samples return mission is “placing pressure on the rest of the Planetary Science portfolio and may impact the balance of the portfolio in future years.” With the delays, NASA officials said they are now looking at a 2028 launch date and a 2033 sample return date.