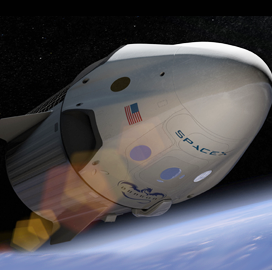 NASA has sent bandages made from 3D bioprinted material to the International Space Station as part of a SpaceX Dragon spacecraft resupply mission.

The spacecraft took off via a Falcon 9 rocket from the Kennedy Space Station in Florida carrying more than 6,500 pounds of science experiments, crew supplies and other cargo. The launch marked SpaceX’s 24th commercial resupply services mission for NASA.

The agency sees the use of bioprinted bandages as a safe and flexible method for healing wounds in space, Nextgov reported.

According to a NASA announcement, the bandages were created with bioprinting machinery that uses an injured person’s viable cells and molecules to form tissue materials. It is seen as a promising tool that could address complexities associated with treating large injuries in space environments.

“The body’s own cells can be extracted from blood and fatty tissue before the mission, and an immediate treatment could be achieved without any time delay—in case of an emergency,” NASA explained.

While the space agency is still experimenting with bioprinting, NASA researchers look forward to including the technology in future missions to the Moon and Mars.

Posted on December 27, 2021 by Adrian Rosenberg