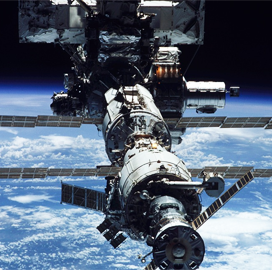 NASA is turning to industry to build what it calls commercial low-Earth orbit destinations, which are billed to become the next generation of space stations.

The start of the CLD project comes amid the impending retirement of the International Space Station, Nextgov reported Thursday.

Phil McAlister, NASA’s director of commercial spaceflight, told attendees at Nextgov’s Emerging Tech Summit that the ISS will still be operational for several years but it is expected to be retired in the latter part of the decade.

The CLDs will support the growth of commercial activities in low Earth orbit and the development of a robust commercial space economy from which NASA, private entities, public institutions and foreign governments can purchase services.

McAlister noted that by relying on the private sector to build the new space stations, NASA can focus more on deep space exploration.

“The solar system is a big place, so I think NASA is going to be very busy in the coming decades,” he said.

Solicitation for the two-phase CLD project has already begun.

According to an announcement posted on SAM .gov, phase one will focus on the design aspect. Submitted concepts must achieve at least a preliminary design review level of maturity.

Under phase two, NASA plans on purchasing end-to-end services, including accommodation and transportation of NASA crew and payloads to CLD and back to Earth.

The space agency intends to enter into multiple agreements with private industry to pursue the development of the vehicles and systems needed to actualize the CLD project.