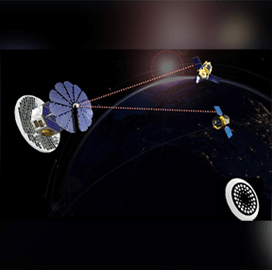 NACHOS will use a hyperspectral imager to locate sources of trace gases in areas as small as 1.61 square feet. If successful, it will be the smallest, highest resolution, space-based instrument that is dedicated to monitoring sulfur dioxide, nitrogen dioxide and other trace gases.

It will be loaded onto a CubeSat and will be positioned around 300 miles above the Earth’s surface. The instrument is part of Northrop Grumman‘s 17th resupply mission to the International Space Station, SpaceRef reported.

Monitoring trace gases requires highly sensitive instruments to gather high-resolution data. To achieve that, manufacturers would have to create large satellites that are equipped with a suite of powerful sensors.

In contrast, NACHOS only weighs 13 pounds and measures 18 cubic inches overall. Despite the compact size and weight, it comes with an ultra-compact hyperspectral imager and uses onboard processing algorithms that can reduce the size of data transmissions and the time it takes to relay information back to Earth.

Steve Love, a researcher and the lead official for the Space and Remote Sensing Group at the Los Alamos National Laboratory, said having the ability to spot trace gases would allow for more effective volcanic activity prediction because gases can be spotted before any seismic activity. According to Love, spotting sulfur dioxide and other volcanic gases would allow officials to identify a potentially erupting volcano before things get worse.

NACHOS will remain onboard the Northrop Grumman Cygnus cargo spacecraft until it detaches from the ISS in May. It will then be dropped off in low-Earth orbit before Love and his team starts commissioning the instrument ahead of technology validation and science missions.

NACHOS is expected to remain in orbit for a year.