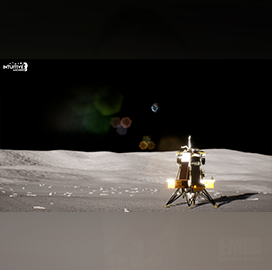 Intuitive Machines has secured a $77.5 million NASA contract to transport research equipment to the Moon under the space agency’s Commercial Lunar Payload Services initiative. The launch is expected to take place in 2024.

As part of the contract, Intuitive Machines will provide a variety of services, including payload integration, delivery and operations. The company will send its Nova-C lander to Reiner Gamma, a geographical feature of the Moon known as a lunar swirl. Equipment aboard the lander will give NASA the chance to observe the Moon’s radiation environment and possibly determine ways on how to mitigate its effects.

The payloads that will be loaded onto Nova-C are NASA’s Lunar Vetrex, the Cooperative Autonomous Distributed Robotic Exploration, the MoonLIGHT retroreflector and the Lunar Space Environment Monitor. The payloads are expected to be around 203 pounds in mass, NASA said Thursday.

The space agency is continuing to explore the nature of lunar swirls and their relationship to the Moon’s magnetic field. Chris Culbert, manager of the CLPS initiative at NASA’s Johnson Space Center in Houston, said the pieces of equipment Nova-C will carry are designed to obtain data unique to Reiner Gamma.

The Intuitive Machines contract is the third task order issued to the Atlanta-based company and is the seventh surface delivery task issued to a CLPS partner.

CLPS is a contract vehicle that allows several American companies to deliver science and technology equipment to the lunar surface. The vehicle has a maximum ceiling of $2.6 billion and an ordering period that stretches through 2028.

The Artemis program is NASA’s effort to send humans back to the Moon by 2024. The lunar landing will also be the first step of NASA’s plans to send the first humans to Mars.