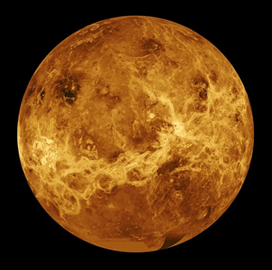 The DAVINCI+ and VERITAS missions, which were selected over two other mission concepts, are scheduled for launch in the 2028 to 2030 timeframe.

Approximately $500 million will be allocated per mission for development, NASA said Thursday.

DAVINCI+, which stands for Deep Atmosphere Venus Investigation of Noble gases, Chemistry and Imaging, is billed as the first U.S.-led mission to Venus’ atmosphere since 1978.

The goal of the mission is to understand the formation and evolution of Venus’ atmosphere and determine whether oceans existed on the planet.

The second mission is VERITAS, short for Venus Emissivity, Radio Science, InSAR, Topography and Spectroscopy. It is described as a planetary mapping mission geared towards understanding Venus’ geologic history.

NASA hopes to chart surface elevations over nearly the entire planet using a synthetic aperture radar. The process would allow for the creation of 3D reconstructions of topography and confirm plate tectonics and volcanic activity on Venus.

James Garvin of the Goddard Space Flight Center and Suzanne Smrekar of NASA’s Jet Propulsion Laboratory will serve as principal investigators for the DAVINCI+ and VERITAS missions, respectively.

Tom Wagner, a scientist for NASA’s Discovery program, expects the combined results of the two missions to lead to a rediscovery of Venus.

DAVINCI+ and VERITAS were favored over the proposed TRIDENT mission to Neptune and the Io Volcano Observer mission to Jupiter. The selection was made as part of the ninth Discovery Program competition.