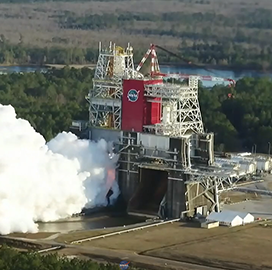 The National Aeronautics and Space Administration announced that its engineers fired a two-foot-diameter, subscale solid rocket booster in tests that took place on Wednesday at the Marshall Space Flight Center. During the test conducted at the center’s East Test Area, the new rocket managed to produce 92,000 pounds of thrust, NASA said Saturday.

In a statement, the space agency said the test was done as part of the booster obsolescence and life extension program. The effort is expected to yield next-generation rocket motors that would eventually be integrated into future iterations of the Space Launch System.

It was explained that the new rocket motors that would come out of the BOLE program would be larger and more powerful, able to send heavier payloads to the moon and beyond. An earlier test of the new rocket design, conducted on Dec. 2, 2021, only produced 76,400 pounds of thrust, according to NASA.

However, the latest test saw the integration of new technologies into the rocket’s design. NASA said that the rocket was lengthened with another half segment and the aft dome and nozzle were redesigned.

NASA also said that lead booster contractor Northrop Grumman used a new, more potent propellant during the latest rocket test. This was done to subject the rocket to the maximum operating pressure it could experience during the actual launch.

The space agency added that data from the test will be used to analyze how the rocket motor will perform under extreme pressure, which could happen during very hot days at the launch pad at NASA’s Kennedy Space Center in Florida.