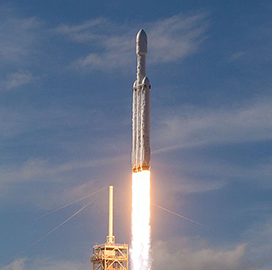 NASA announced Friday that it has selected SpaceX to deliver a spacecraft to Jupiter’s frozen moon, Europa, in October 2024 under a $178 million contract. The decision was made after the agency was cleared to use private sector launch services instead of being limited to the in-house Space Launch System.

SpaceX’s participation in the Europa Clipper mission was widely anticipated after Congress, through the 2021 omnibus spending bill, gave NASA the flexibility to choose an alternative launch vehicle. Earlier budget allocations approved by lawmakers specified that only SLS can be used for Europa Clipper. Lawmakers’ change of heart clears the way for the use of SpaceX’s Falcon Heavy rocket to carry the mission’s payload, SpaceNews reported Saturday.

NASA has long sought Congress’ approval to outsource launch services for the Europa-bound spacecraft. The legislature eventually gave way because of potential hardware compatibility issues found in 2020 between the Europa Clipper vehicle and the SLS rocket. The 2021 spending bill directed NASA to use SLS for the Jupiter mission only if the SLS is available and if technical incompatibility concerns are addressed.

Falcon Heavy has flown three times, although it has not launched since June 2019. Alternative vehicles with the performance required for the mission, such as Blue Origin’s New Glenn and United Launch Alliance’s Vulcan Centaur, will not make their first launches until 2022 at the earliest, SpaceNews added.

The space agency said that launching Europa Clipper on Falcon Heavy, rather than SLS, will bring savings on both cost and schedule. NASA said a commercial launch could save the agency over $1.5 billion compared to using its own SLS rocket. A report by the agency’s Office of Inspector General brings the projected cost savings down to less than $300 million, SpaceNews said.